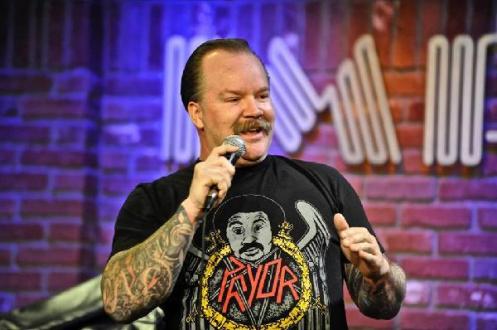 A throwback to the days of rock-star comics, Bay-area bred Dean Delray is an enigmatic funny man who brings the party to the stage and pulls no punches with his rock n roll-infused comedy. With subject matter that draws from and mirrors his own crazy life in music and comedy, sex, drugs, and rock-n-roll are all dished up Delray style: raw and honest with a razor-sharp edge! Delray is a motorcycle riding, hard-driving comic who was once signed by 4 Non-Blondes' Linda Perry, toured internationally with The Wallflowers, and opened for Tom Petty, Lenny Kravitz, the Black Crowes, and many more during his time in music. A natural jester, Delray is now fully dedicated to comedy, delivering side-splitting laughter with verve and conviction. With roles in Quentin Tarantino's Hell Ride, Ice Cube's The Longshots, Noise Matters and I LIVE, Delray has quickly become one of the most exciting comics on the Hollywood scene. Delray was recently featured on Pete Holmes podcast YOU MADE IT WEIRD,Jay Mohr's Mohr Stories and Marc Marons WTF podcast & Marc's I.F.C.show Maron. Dean also his own successful podcast LET THERE BE TALK on the ALL THINGS COMEDY network.